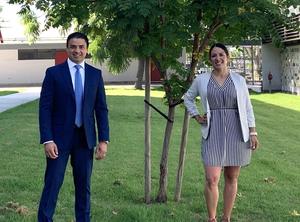 Ortega earned a Bachelor of Arts in child development from Cal State Los Angeles and a Master of Arts in educational leadership from Azusa Pacific University, where he also earned his administrative credential.

“I look forward to working alongside all of our Rio Hondo stakeholders in creating a supportive school environment, culture and place of academic excellence that we will all be proud to call our own,” Ortega said.

Barba started at Potrero School as a middle school teacher in 2010 and also served as a teaching assistant principal, summer school principal as well as other leadership roles focused on family and community engagement.

Barba earned a Bachelor of Arts in human services from Cal State Dominguez Hills and a Master of Arts in education with a focus on vocabulary development from Whittier College. She earned her administrative credential from Cal Poly Pomona.

“I look forward to the upcoming school year where we will collaborate and make this year not only safe for all but a year to empower stakeholders to find their voice and reach their goals,” Barba said.

Together, Ortega and Barba said they want to focus on building strong relationships with educators and families and provide the best all-around education for each student.